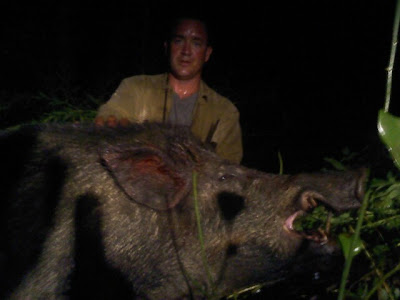 Big dangerous animal holding spotlight with LaRue. Or, this week, LaRue's hunting friend whose name I do not know. In this here pic that Larue took of his friend who is sweating up a storm from the hard hunt, is the 300lbs southern wild boar. Wild boar is hunted by curdogs. I'm not exactly sure of what that is just yet cause LaRue was busying doing his job (buying pipe from Coley's) & didnt have much time for mama's interview via me on the phone. I'll get the details later. Anyhow: that wild boar severely wounded 4 dogs in the hunt to the taxidermist as one bigass stuffed hog, & he got those 4 dogs with his tusks. None of the dogs died. On top of all LaRue's skills, he is also somewhat a vet. LaRue stapled them dogs where the hog's tusks dug in & all of them lived. Thanks, LaRue, for sending the picture.
------ 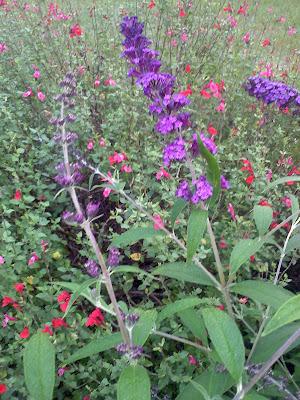 one of the most special things of yesterday was mama walking around the farm early in the morning before she went to work & taking lots of pictures of all the best flowers, & then emailing them to me. I woke up to many many pictures that are home. This one is my favorite. 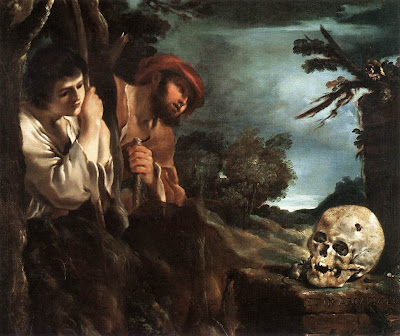 thank you, il guerncino. great depiction of my head this after-birthday day. leave it to the italian baroques. et in arcadia ego gone dark as all hell, which i love. i love gooooood shephards.
ouch my head but i always have fuuuun fuuuun