on November 16, 2011
i pretty much love Benetton advertising. Benetton canned controversial photog Toscani in the late 00s due to the outrage of the "We on Death Row" campaign, which spotlighted American prisoners on death row (Benetton is an Italian clothing company, yes...) & made, perhaps, its audience identify even empathize with these prisoners. American outrage: yes. am I a bit horrified by these ads: yes.

Toscani did brilliant work for Benetton in the 80s, 90s, & 00s: mostly positive messages supporting equality throughout the world--yes, sometimes embodying borderline shock tactics. i think the David Kirby AIDS (Theresa Frere) campaign is just pure brilliance. how significant the change post-Kirby ad was to the world highlighting the controversy surrounding AIDS at this specific time (early 90s) in America: who knows. brought a lot of attention & humanized AIDS; the remarkable parallel of Kirby to Christ is mind-blowing. bless, Benetton, you Italian clothing company.

i teach visual analysis & rhetoric in WRT 101--i always teach a whole class session just on Benetton's advertising campaigns, specifically the Isabelle Caro "No Anorexia" campaign, the "We on Death Row" one, & the AIDS campaign, esp the David Kirby photos which shocks the hell out of my students. we all have mixed feelings about Benetton. i think this is fabulous. we're thinking critically. that's superb.

well, Benetton is at it again. world leaders are making out. Obama is kissing Chavez & China's prez. North Korea is kissin on South Korea. Israel & Palestine...in a lip-lock...wtf? the ad of the Pope making out w/ Egyptian Imam is already pulled--even though today was its first public day. i'm not surprised. Benetton, Italian clothing company took such a hit after "We on Death Row" that i'm shocked they're back it--ruffling feathers & acting out politically when their aim should be to sell clothes, right? i say WORK IT, Benetton. your ethics could be debatable, but thank goodness you get people thinking. the message with their new campaing: UNHATE. get it, B! 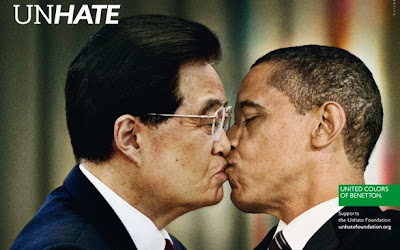 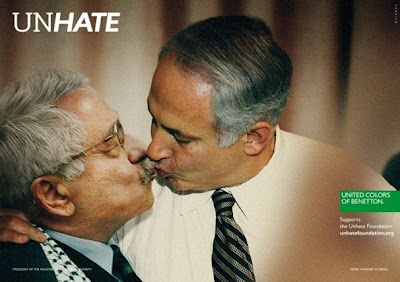 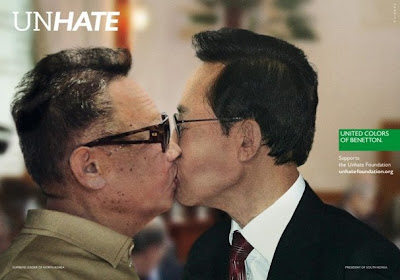 revolutionizing advertisement or crossing the line...