BKLYN longings / kara walker / domino sugar factory / work title: "a Subtlety or the Marvelous Sugar Baby an Homage to the unpaid and overworked Artisans who have refined our Sweet tastes from the cane fields to the Kitchens of the New World on the Occasion of the demolition of the Domino Sugar Refining Plant." 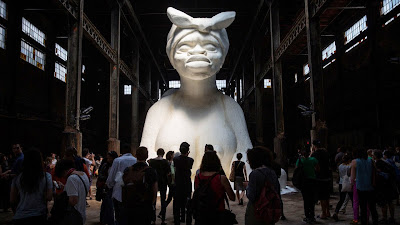 from npr (by audie cornish): I ask her if at a certain point she worries about doing work that is seen as being just about race. "I don't really see it as just about race," she says. "I mean, I think that my work is about trying to get a grasp on history. I mean, I guess it's just kind of a trap, in a way, that I decided to set my foot into early on, which is the trap of race — to say that it's about race when it's kind of about this larger concern about being." I tell her it's almost impossible to talk about our history without talking about race. She replies: "There [are] scholarly conversations about race and then there's the kind of meaty, unresolved, mucky blood lust of talking about race where I always feel like the conversation is inconclusive." Inconclusive, but for artist Kara Walker, ongoing.